Processions and Catenacciu - Easter in Corsica : between tradition and religion
Skip to content

Processions and Catenacciu – Easter in Corsica : between tradition and religion 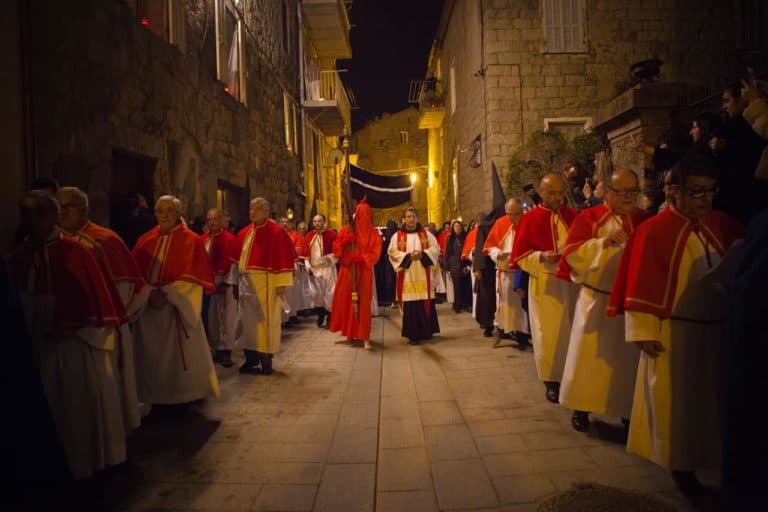 The celebration of Catenacciu is well established and each year, thousands of pilgrims travel to attend. For that matter, if only one tradition were to remain in Corsica, without a doubt it would be Catenacciu. It is one of the most attended events and brings together people of all generations. Catenacciu, and more broadly the Holy Week in Corsica, are events you will not want to miss.

Holy Week in Corsica is known for its numerous religious processions all over the island. The processions take place most commonly on Good Friday. In certain towns or villages, they start Thursday and can last until Sunday.

This holy week is first of all recognized for the absence of all bells in the towns and villages. With the silence of the bells, you can hear the sound of the wooden instruments that announce Tenebrae. This ritual happens around a large candelabra that has 15 candles that are extinguished one after the other. As the last candle is extinguished, the sound of night of Tenebrae begins to chase out the devil.

Then the processions, led by the friary, take over for Good Friday. The friaries, the oldest of which have origins dating back to the 12th and 13th centuries, are still active in the social and traditional life of Corsicans. In each neighborhood, the chapel and its friary represent a different trade (carpenters, lawyers, gardeners).

Among the processions, those in Bonifacio and Sartène are particularly spectacular. They evoke the sacred memory and the popular enthusiasm for this event.

THE PROCESSIONS IN BONIFACIO

Located in Southern Corsica, only one hour from l’hôtel Sampiero Corso, this town offers a unique landscape. Between the citadel, cliffs, seascape and islands, this landscape will take your breath away. But the town also has an original touch with its religious life and famous friaries.

On Thursday, the ceremonies start at 3:30pm with the choir at the Sainte Marie church. The five friaries, reunited, sing for Tenebrae after having lit the 15 candles of the candelabra. This ritual lasts more than two hours. During this time, the candles will be extinguished one after the other, following the ancient ritual.

Thursday night, around 9:00pm, the processions will begin with torches, lanterns and small shrines (statues carried during the procession). The Friary of the Holy Cross, the most ancient of Corsica, starts by leaving their hospice, then followed by the three other friaries of the upper region:  Saint Jean Baptiste, Saint Barthélémy et Saint Marie Madeleine, who also leave their respective churches. As for the Saint Erasme brothers (fisherman friaries), they simply mix with the other friaries.

At 8:00am on Holy Friday, the Saint Croix Friary starts. Following the same order as the night before, the other friaries follow. The processions follow a route through the streets of the upper town, marked by stops for prayer in front of the sepulchers. Next, the friaries walk through the Genoese door to the town and walk down to the marina to pray in the Saint Erasme church. At each crossing of doors, the friaries, barefoot and hooded, greet each other in silence, with their banners together.

At 4:00pm, the Tenebrae is sung by all the brothers in the heart of the Saint Marie church. The children make noise with rattles to replace the ringing of the bell.

Friday night at 9:00pm, the Grandes Châsses processions start. Sainte Croix starts, followed by the other friaries, at the heart of which are the brothers of saint Erasme. In the Sainte Croix statuary, they place a relic, a piece of the real cross. This shrine is more important than the one the night before. The most impressive is the shrine of Saint Barthélémy that weighs about 800 kg.

After having walked their path, the friaries return to their respective churches. At this time, the brothers restore their energy by eating anchovies, tuna, beans and “Fugazzi” (small cakes).

Only about 15 kilometers from the hotel, in “the most authentically Corsican village in Corsica”, according to Prosper Mérimée, there is a Holy Friday ritual that has not changed since the 14th century: Catenacciu (the chain carrier). It is without a doubt the most well known Easter procession in Corsica. However, it is also the most mystical, and shows a large popular fervor.

Around 9:30pm, the sound of chains slowly scraping the ground amidst total silence will begin echoing. Next, you will hear the song Perdone o moi dio fill the Porta place facing Saint Marie church.  Then appears the penitent, dressed in an alb and a red hood, carrying a heavy cross (32 Kg) and chains around his ankle (15 Kg). The white penitent represents Simon of Cyrène (who will help him get up from three falls) and the penitents dressed in black wear over their shrouds a statue of dead Christ. This starts a 2 kilometer walk through the ancient streets lit up with candles in the windows of houses that have the stone facades typical of the Island of Beauty.

This tragedy that the public watches is that of the passion of Christ. This symbolically takes the path towards Golgotha. Fervor, devotion and respect surround this impressive procession. The catenacciu is anonymous and only the priest of Sartène, from who he asked for penitence, knows his identity. After having spent two days and two nights of prayer in small bedroom in the Saint Damien convent in Sartène, he embarks on this holy path either to atone for a mistake, in gratefulness for a granted wish, or to ask for divine grace. Catenacciu is so well known in the religious world of Christianity that penitents come from all four corners of the world. And they do not hesitate to reiterate their request throughout the years, hoping to be lucky enough to be chosen by the priest.

Easter Sunday celebrates light, the resurrection of Christ and joy. In Corsica, it is traditional to have a family dinner on Sunday. However, it is also traditional to share a picnic on Easter Monday. Thus, you have the opportunity to celebrate the return of beautiful weather and post-hardships of the days before Easter. We call this Merendella, the occasion to fill your picnic basket with charcuterie, cheese, wine and Caccavelli (traditional Easter pastry on which we place one or multiple eggs that harden while cooking)

DATES OF HOLY WEEK 2019 AND OF CATENACCIU

Discover our vacation residence on the Portigiolo beach